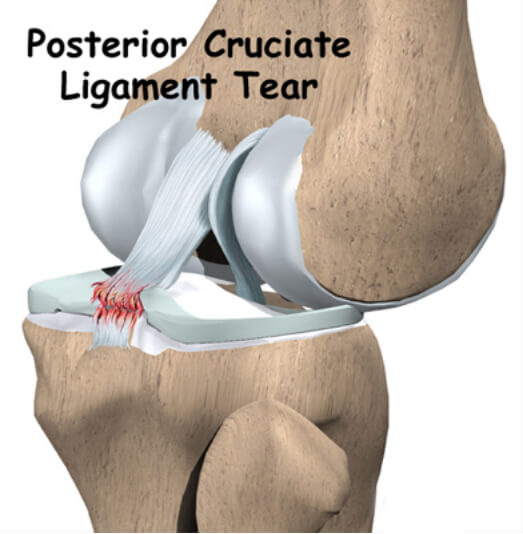 Where is the PCL, and what does it do?

The PCL is the primary stabilizer of the knee and the main controller of how far backward the tibia moves under the femur. This motion is called posterior translation of the tibia. If the tibia moves too far back, the PCL can rupture.

How do PCL injuries occur?

PCL injuries can occur with low-energy and high-energy injuries. The most common way for the PCL alone to be injured is from a direct blow to the front of the knee while the knee is bent. Since the PCL controls how far backward the tibia moves in relation to the femur, if the tibia moves too far, the PCL can rupture.

Sometimes the PCL is injured during an automobile accident. This can happen if a person slides forward during a sudden stop or impact and the knee hits the dashboard just below the kneecap. In this situation, the tibia is forced backward under the femur, injuring the PCL. The same problem can happen if a person falls on a bent knee. Again, the tibia may be forced backward, stressing and possibly tearing the PCL.

The symptoms following a tear of the PCL can vary.  Most patients with a PCL injury sense a feeling of stiffness and some swelling. Some patients may also have a feeling of insecurity and giving way of the knee, especially when trying to change direction on the knee. The knee may feel like it wants to slip.

The pain and moderate swelling from the initial injury will usually be gone after two to four weeks, but the knee may still feel unstable. The symptom of instability and the inability to trust the knee for support are what requires treatment.

The history and physical examination is probably the most important tool in diagnosing a ruptured or deficient PCL. During the physical examination, special stress tests are performed on the knee. Three of the most commonly used tests are the posterior Lachman test, the posterior sag test, and the posterior drawer test. The posterior drawer test is a very sensitive and specific test for PCL injuries. We place your knee and leg in various positions and then apply a load or force to the joint. Any excess motion or unexpected movement of the tibia relative to the femur may be a sign of ligament damage and insufficiency.

Tests are also done to see if other knee ligaments or joint cartilage have been injured. Damage to the PCL along with damage to the posterolateral corner (PLC) of the joint cartilage often leads to rotatory instability. Failure to diagnose a PCL injury can be a major cause of failure of surgery to repair a ruptured anterior cruciate ligament (ACL). 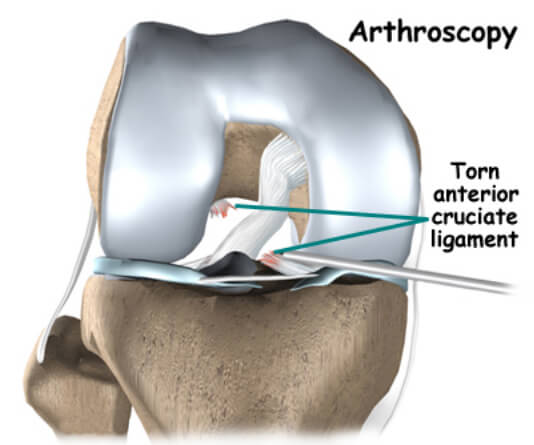 The magnetic resonance imaging (MRI) scan is probably the most accurate test without actually looking into the knee. test does not require any needles or special dye and is painless.

In some cases, arthroscopy may be used to make the definitive diagnosis if there is a question about what is causing your knee problem. The vast majority of PCL tears are diagnosed without resorting to this type of surgery, though arthroscopy is sometimes used to repair a torn PCL.

What can be done for the condition?

Initial treatment for a PCL injury focuses on decreasing pain and swelling in the knee. Rest and mild pain medications can help decrease these symptoms. You may need to use a long-leg brace and crutches at first to limit pain. Most patients are given the okay to put a normal amount of weight down while walking.

Less severe PCL tears are usually treated with a progressive rehabilitation program. Patients intending to return to high-demand activities may require a functional knee brace before returning to these activities. They help keep the knee from giving way during moderate activity, but they can give a false sense of security and won’t always protect the knee during sports that require heavy cutting, jumping, or pivoting.

Most patients receive physical therapy treatments after a PCL injury. Therapists treat swelling and pain with the use of ice, electrical stimulation, and rest periods with your leg supported in elevation.

Exercises are used to help you regain normal movement of joints and muscles. Range-of-motion exercises should be started right away with the goal of helping you swiftly regain full movement in your knee. This includes the use of a stationary bike, gentle stretching, and careful pressure applied to the knee by the therapist.

Exercises are also given to improve the strength of the quadriceps muscles on the front of the thigh. As your symptoms ease and strength improves, you will be guided in specialized exercises to improve knee stability.

If the PCL alone is injured, nonsurgical treatment may be all that is necessary. When other structures in the knee are injured, patients generally do better having surgery within a few weeks after the injury. Long-term studies show that without reconstructive surgery, over time, knee instability and joint degeneration develop.

If the symptoms of instability are not controlled by a brace and rehabilitation program, then surgery may be suggested. The main goal of surgery is to keep the tibia from moving too far backwards under the femur and to get the knee functioning normally again. New studies also suggest the need to restore medial-lateral (side-to-side) and rotational stability, too.

We reconstruct the  PCL using a piece of tendon or ligament to replace the torn PCL. This surgery is most often done using the arthroscope (mentioned earlier). Incisions are usually still required around the knee, but the surgery doesn’t require  to open the joint. The arthroscope is used to perform the work needed on the inside of the knee joint.

In a typical surgical reconstruction, the torn ends of the PCL must first be removed. Once this has been done, the type of graft that will be used is determined. One of the most common tendons used for the graft material is the patellar tendon & Hamstring Tendons.

What should I expect after treatment?

Nonsurgical treatment of an injured PCL will typically last six to eight weeks. You will be able to return to your sport activities when your quadriceps muscles are back to near their normal strength, your knee stops swelling intermittently, and you no longer have problems with the knee giving way.

You may use a continuous passive motion (CPM) machine immediately after your operation to help the knee begin to move and to alleviate joint stiffness. The machine straps to the leg and continuously bends and straightens the joint. This continuous motion is thought to reduce stiffness, ease pain, and keep extra scar tissue from forming inside the joint.

You will also have to wear a protective knee brace for up to six weeks after surgery. You’ll probably use crutches for two to four weeks in order to keep your knee safe and will probably be instructed to put only a limited amount of weight down while you’re up and walking.

When you get full knee movement, your knee isn’t swelling, and your strength is improving, you’ll be able to gradually get back to your work and sport activities.

Ideally, you’ll be able to resume your previous lifestyle activities. However, athletes are usually advised to wait at least six months before returning to their sport. And most patients are encouraged to modify their activity choices.

You will probably be involved in a progressive rehabilitation program for four to six months after surgery to ensure the best result from your PCL reconstruction. In the first six weeks following surgery, expect to see the physical therapist two to three times a week. If your surgery and rehabilitation go as planned, you may only need to do a home program and see your therapist every few weeks over the four to six month period.